Ep #81: How to Say “No” to Preschoolers Without Meltdowns

Friends, I have a question for you: Do you ever dread saying no to your students because you’re worried they might have a full on meltdown?

I get you, I’ve been there too.

Trying to say no to a child without having them throw a temper tantrum is a whoooole lot of work.

But as you know if you’ve been listening to the podcast for a while, it’s not impossible!

Every preschool classroom problem has a solution. Yes, even this one.

And to discuss this, the brilliant Dr. Carolyn Bobb-Green is back on the podcast for a second episode of the Behavior Bites series.

Today, she’ll be sharing with us why those meltdowns happen, how to prevent them, and what to do in case one of your students decides to go full Hulk anyway.

Why Children Have Meltdowns When Told No! 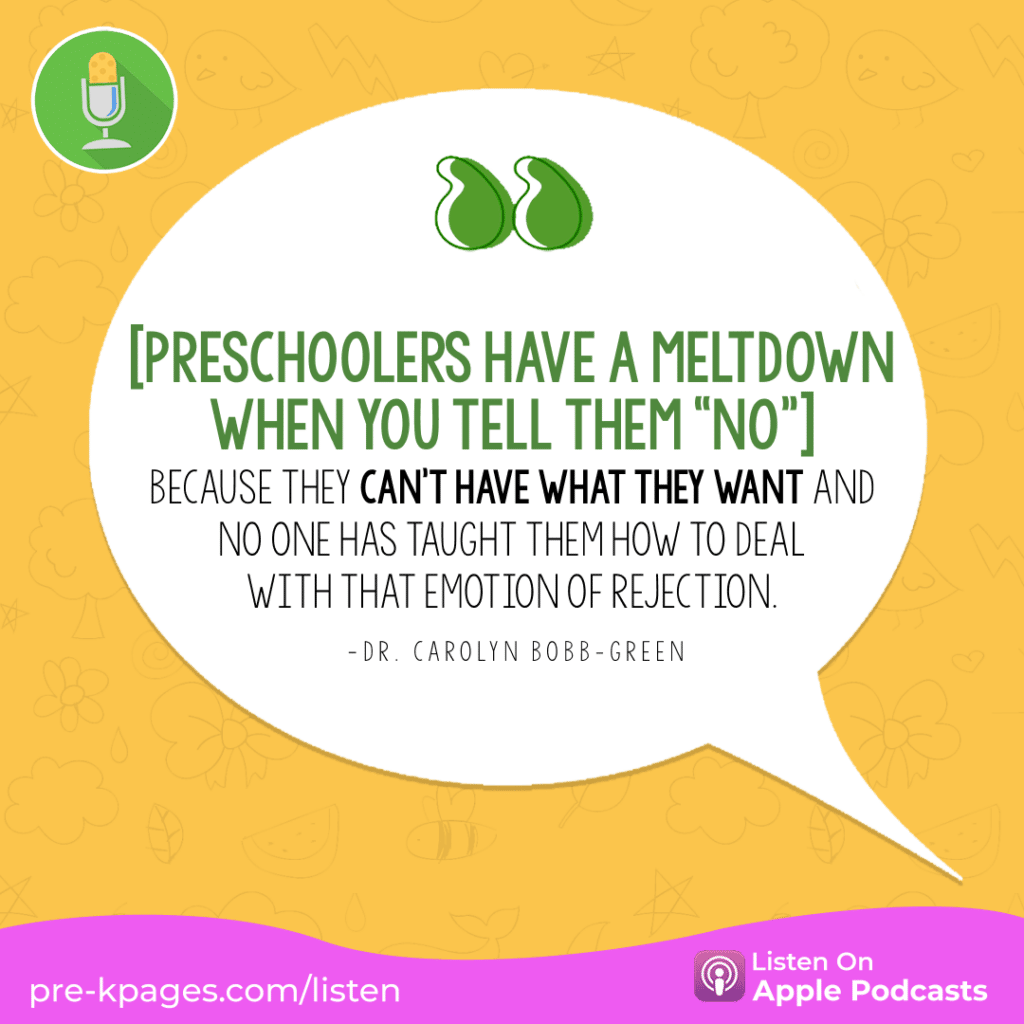 The short answer? Children hate being told “no” simply because that means they won’t get what they want.

The long answer? Most children have never learned how to handle rejection, so when they hear “no,” they just don’t understand how to behave and they have a meltdown.

And this is understandable. After all, if no one has taught you how to deal with the word “no,” you end up dealing with it the best way you know how. And for little kids, that means having a full on meltdown in the middle of the classroom.

Children also have meltdowns upon hearing “no” because that’s how they get the attention they want from their teachers, parents, caregivers, etc… If every time they start kicking and screaming they get what they want, they’ll just keep doing it.

By giving in, we’ve told the child “It’s okay for you to behave this way, when I tell you “no” and you behave this way, I’ll give you what you want.” Yes, most of us end up reinforcing this behavior without even noticing.

Children behave the way that they think either is acceptable or will get them the outcome that they want. That’s the main reason they have meltdowns and temper tantrums when we say “no” to them.

And in order to stop this behavior, things have to change in the preschool classroom. Sadly, we do not take enough time as professionals to teach children how to deal with their emotions. However, we have to teach by example. Telling a child they can’t behave that way is not enough, we have to actually put in the work and teach them what to do when someone tells them “no.”

If we start being strategic about this with our children from the time that they’re toddlers, and teach them how to respond to different types of things when they start showing unacceptable behaviors, most of those tantrums will be cut out.

How to Say “No” Without Saying “No” 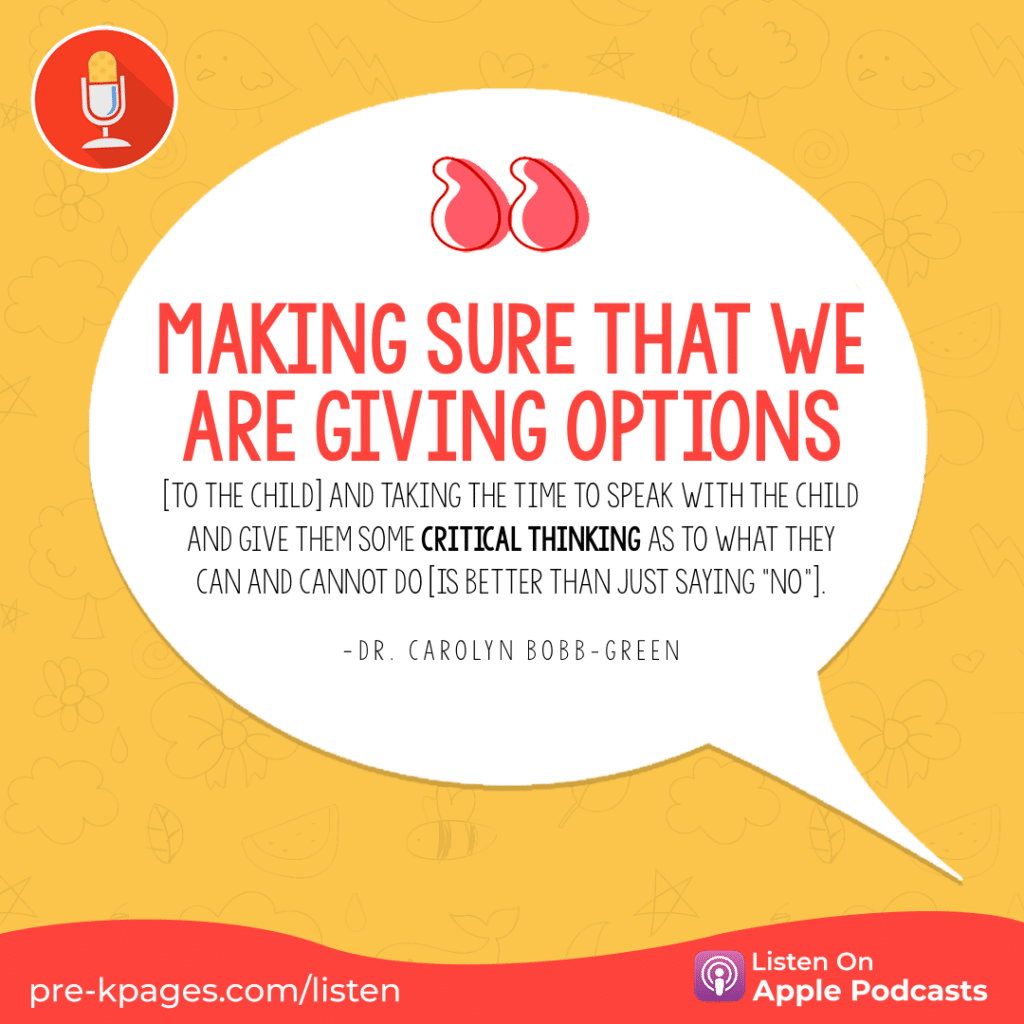 A lot of early childhood teachers might feel like they can’t say “no” to their students in case they throw a tantrum. Or because their director told them not to. Or simply because they think the word “no” has too much of a negative connotation to be used in the preschool classroom.

But, there are actually ways you can say “no” without using the word.

You can explain to the child why they can’t do what they want to do. For example, if a kid wants to play with sharp scissors in the classroom, don’t just tell them “no.” Instead, you can go with something more along this sentence: “Those scissors look pretty sharp, right? You might hurt yourself if you play with them.”

You can also offer the child another option. Going with the same example above, you can say “Those scissors are a bit too dangerous to play with. How about you play with this instead? See? It’s just as fun!”

Saying “no” to a child without any explanation or a different option is a surefire way for them to have a meltdown, so it’s always best not to use that word on its own.

What else can you do instead of saying “no?” Carolyn and I dive deeper into that in the episode above, so make sure to give it a listen to learn more!

Links Mentioned in this Episode:

Check out Training U To Succeed

This article was originally published by Pre-kpages.com. Read the original article here.
Previous Post 20 of Our Favorite Videos for Teaching Kids About Friendship
Next Post What’s really in the AP African American studies course that Florida rejected?

All kids need to learn how their bodies work and how to take care of them. Perhaps no part…

Online Business Ideas That Will Make You A Millionaire in 2023

Online Business Ideas That Will Make Millions For You in 2023